Design a site like this with WordPress.com
Get started
Skip to content
Steve Pringle Uncategorized December 2, 2018 4 Minutes 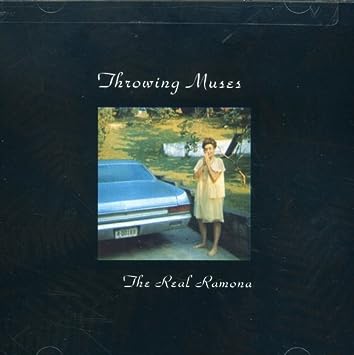 Introduction
Firstly, apologies to @SkippyVinyls. I asked for suggestions to cover in this blog, and he got in early with Saint Etienne’s Sound Of Water. As he has been a regular supporter / liker / retweeter of the Fi5 blog, I thought it only fair to give his suggestion a go next. However, slight problem: I hated it. Really hated it.

I found it twee, limp and wet, and her voice is just like nails down a blackboard to my ears. I probably could have enjoyed writing a few hundred words ripping it to shreds (reading and writing bad reviews can often be even more fun than extolling virtues), but I thought that would be rather churlish in the circumstances. So, sorry SV – I did give it a listen, but it’s really not for me!

I decided instead to go for Mark’s suggestion of Throwing Muses’ The Real Ramona.

Throwing Muses
I first heard TM via a free 7″ that came with Sounds in 1988: I don’t remember particularly liking or disliking Mania to any great extent. I was far more interested in Hey, which, at the time was unlike anything I’d ever heard before. (I haven’t really listened to Pixies in years, but just having listened to that link, the song still sounds exceptional now.) Subsequently, I’m pretty confident that I must have heard a fair few TM songs via friends’ compilations, playlists, etc. But none of them ever stuck in my mind. I have an overall impression of what the band generally sound like, but I think that this may largely be based on The Breeders’ Pod and Last Splash, both of which I owned in my student days or just afterwards. I thought that TM were a bit more angular and less straightforwardly pop-grunge than The Breeders; but I have to confess that I went into this album with only a vague idea of what to expect.

The Real Ramona
A little spot of research (well, Wikipedia) told me that the band formed in 1981 and started releasing records in 1987. Wikipedia summarises their sound as: ‘shifting tempos, creative chord progressions, unorthodox song structures, and surreal lyrics’ which largely fits in with my expectations.

TRR was their fourth album, released in 1991 (the year of Nevermind and grunge). NME named it the 35th best album of the year (but then they made the incomprehensibly overrated Screamadelica 3rd, so what do they know?) Kristin Hersh wrote most of it, with Tanya Donelly only chipping in with a couple of songs. It’s almost exactly 40 minutes long, of which I heartily approve.

My first couple of listens were as background music, while I was cooking. First impressions: not as difficult or angular as I expected; I think I was expecting more surprising tempo changes and sharp left turns. Not that it’s run of the mill 4/4 indie-rock at all, but it’s more quirky than challenging. Actually, ‘quirky’ isn’t really the right word, as it suggests a light-heartedness that isn’t really the flavour here. It’s more earnest than that; not in a po-faced kind of way, but it does feel like a serious piece of work. And again, that’s not a criticism: I like the way that it takes itself seriously, but not overly so. There’s no fluff here.

When I got down to more serious listening on the headphones, I found that the first two thirds or so of the album were solid: good, well-crafted music. The highlight up to this point was Graffiti. It has a pretty standard, chugging top-string riff (almost The Cars-ish) that’s offset very nicely by a slightly unpredictable tempo where things occasionally come in a beat ahead of where you expect them (Teenage Fanclub used to do this all the time, e.g. Start Again). I also enjoyed the Tom Waits-esque hammer-on-anvil percussion that appears halfway through, which cuts through the controlled, placid air of the song nicely.

Up to this point, I’d found the music well-crafted, competent and interesting – if not exactly intriguing. It hadn’t, at this juncture, really grabbed me. It was just a little too uniform. Not that there weren’t notable features in each song: Counting Backwards features a choppy, slightly atonal guitar (almost Fripp style); Red Shoes blends sweet and gentle with a bit of spirited stomping; Golden Thing throws a contemporary twist on the Bo Diddley shuffle; Ellen West does something similar with Rumours-era Fleetwood Mac harmonies; Dylan, although slight and ephemeral, provides a pleasantly dreamy mid-album interlude.

But then I got to Hook In Her Head. It starts with a hard-edged chorus-laden arpeggio before breaking out into a deep dry thumping beat with off-kilter double-tracked vocals and a delicious swooping fuzz guitar. It builds to an intense finale, featuring clattering drums and Sonic Youth fuzz-feedback. Tremendous.

The following track, Not Too Soon (one of Tanya Donelly’s two songwriting contributions) is completely different but is my second favourite. A sweet bit of wistful indie-pop: The Shangri-Las meet Hole meet The Darling Buds. A delightful palate-cleanser after the intensity of the previous track.

After that, Honeychain (Tanya Donelly’s other song-writing contribution) offers a loping, country style bass line that soon ramps up the distortion nicely, although it gets a little saccharine by the end. Two Step, the album finale, goes for a lighters-aloft effect but is just a touch dreary.

In Conclusion
Many thanks to Mark for directing me to this one. I liked every track to at least some degree, and there were two songs that blew me away. I’m a notoriously lazy listener sometimes, and this is the sort of album that can just drift by me. It was certainly worthwhile to give it proper consideration, and  – when I can find the time – I’ll definitely give some other TM albums a listen.

And sorry again @SkippyVinyls – I’ll happily listen to another suggestion of yours. Just better stay away from the old synth-pop…